The WeighMax W-SM-100 is a portable scale for someone who needs something as close to pocket size as possible, but doesn't want to sacrifice vital features expected from a digital scale.
Being powered by two AAA batteries(included), you won't have to worry about being stuck with a power plug or recharging on the go. Additionally, you can rest easy that those batteries won't die fast, since the SM-100 scale has an auto shut off feature if you leave it on accidentally, to save the battery life. You can weigh items in a number of units such as g, oz, ozt, and ct in 0.01g increments up to a capacity of 100g.
On the face of the W-SM-100 scale there is a vibrant backlit LCD, a tare button for quick and easy calibration, a mode button to switch weighing units, and an on/off button. The attached cover conveniently closes over these to protect them so the scale remains like new. Also, on the bottom of the lid that you see when the scale is open is a list of instructions for recalibration and other useful tips.
WeighMax's SM-100 Scale is one of their smallest, but they still found a way to get every last feature in there needed to quick and easy weighing of whatever you need.
Dimensions: 9.9 x 6.4 x 1.9 cm
Included: 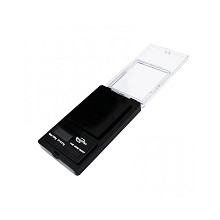 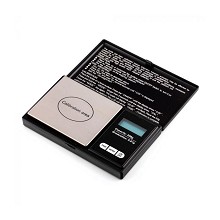 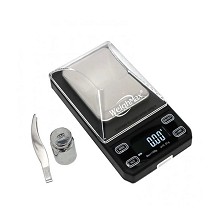